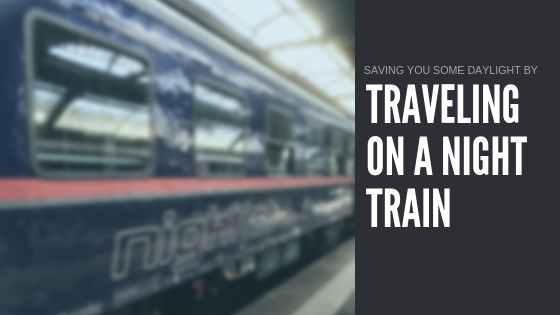 When traveling around in Europe you have the luxury of hopping around the different bordering countries. With such an extensive train system, access to bordering countries is quite common. Trains are coming and going between borders at most hours of the day, having multiple trains departing to the same destination at multiple times. However, when planning for a trip, especially a long distance trip, some trains times are not favorable.

When Rain and I were backpacking through Europe, we had 12 days to make it from Copenhagen to Paris. Not too difficult, but when you add visiting Flensburg, Berlin, Zurich, Milan, Florence, Venice, Rome, Pisa, and Nice all before Paris you run into some scheduling conflicts. Granted there are 12 days and 9 cities, you still have to factor in travel time and tourist time. What may seem like 5 hours can go by rather quickly for those unfamiliar with the location. How did we do it you might ask? We used the Night Jet as our secret weapon. One of our biggest challenges when planning our trip was whether or not we should skip Munich and go straight to Zurich, or stay the night in Munich and push everything back one day.

After hours of research on trying to find the perfect timetable for our trains, it wasn’t going to be easy. Too many complications were possible and we didn’t want to run the risk of missing a train. That was when we found out about the Night Jet. This was a lifesaver for us! We were able to book our tickets from Berlin all the way to Zurich without having to switch trains at all. The plan was originally to spend half a day in Berlin and the remaining time on trains to Munich and maybe staying the night, or continue the journey to Zurich. The next problem was our AirBnB, we needed to check in at a reasonable time, so arriving in Zurich at 4am wasn’t possible. This concluded that we needed to spend a night in Munich, and push everything back. Thankfully that wasn’t our only option.

The New Plan – Spend all day in Berlin explore as much as we can and then head straight to Zurich. Using the Night Jet we booked our departure for 10pm and had an arrival time of 9am. This was plenty of time to sleep and get rested up before Zurich.

If we were to take a regular route it could have taken anywhere from 10-20 hours depending on train departures for multiple trains, the speed, and number of stops each regional train taken.

There are few train lines that offer overnight experiences, however only certain routes are offered. So, if you’re trying to get from Sicily to Marseille, chances are you probably won’t find an overnight train for that specific route.

If you do choose the Night Jet, here is what you can expect. 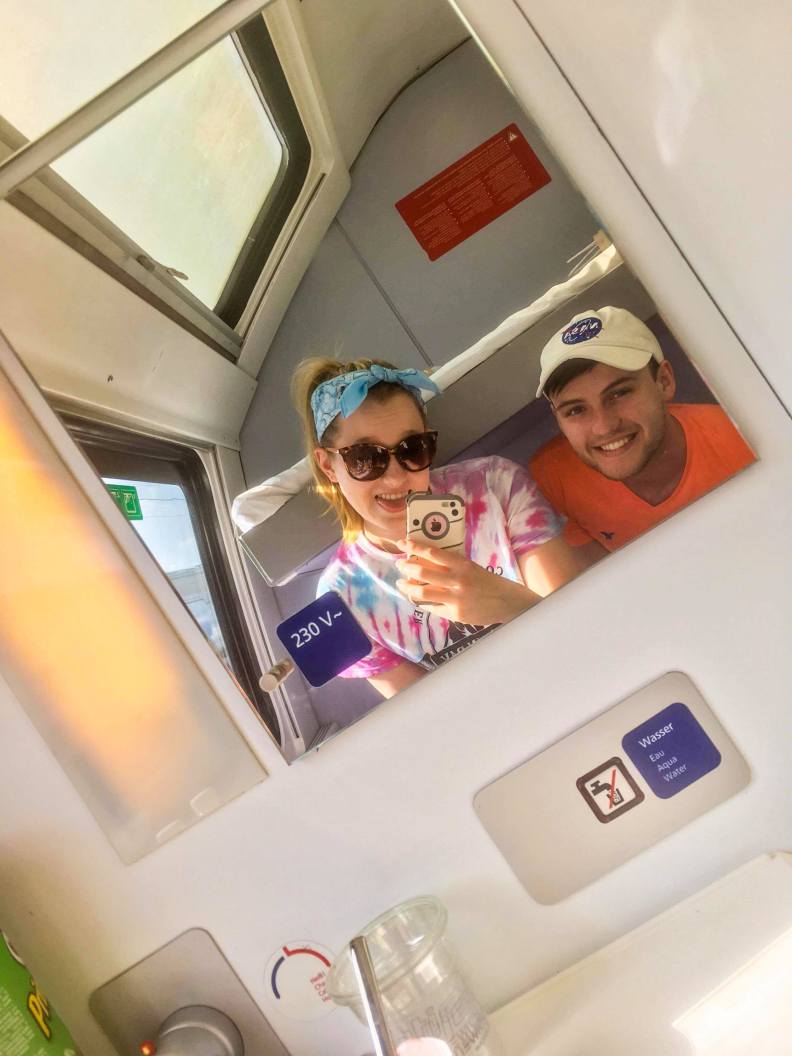 Settling in took so long for us, because it was incredibly difficult to get the both of us and our bags situated with only enough space for one of us to stand up at a time. After exchanging bursts of irritation and laughter we finally managed to get situated. It really wasn’t irritating; I was just having a moment, while Rain thought it was hilarious.

After spending the entire day walking around Berlin in 80-degree (Fahrenheit) weather we wanted a refreshing shower. Rain thought that showers were included when she was researching this part of our journey. Unfortunately, there were no showers or at least no showers available with our tickets. Rain made the decision to shut the blinds on both windows and have us both take sponge baths with the sink in our room. We used the towels and soap that was complimentary and took turns ridding our bodies of the sweat and stinky feet.

We chose our bunks and got ready to fall asleep. Thankfully the windows had a thick shade to keep out the lights from the other stations along our journey.

After a well-deserved sleep, we woke up with plenty of time to get ready before our destination. 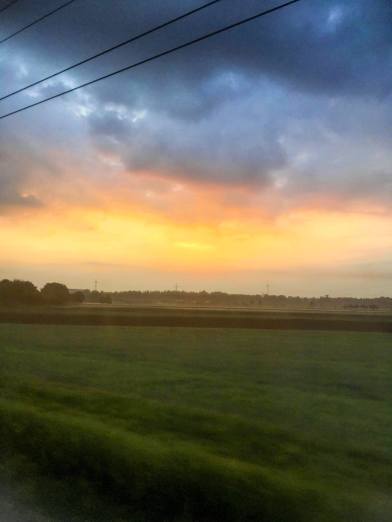 In the morning one of the train attendants knocked on our door and gave us each a piece of paper. The paper listed all of the breakfast options so you just mark which items you would like included in your complimentary breakfast. They had options like yogurt, bread, meats, cheeses, juice, coffee etc. We handed the order slips to her when she came back around and waited for our meal. As you can see in the picture we got a nice spread for two people. 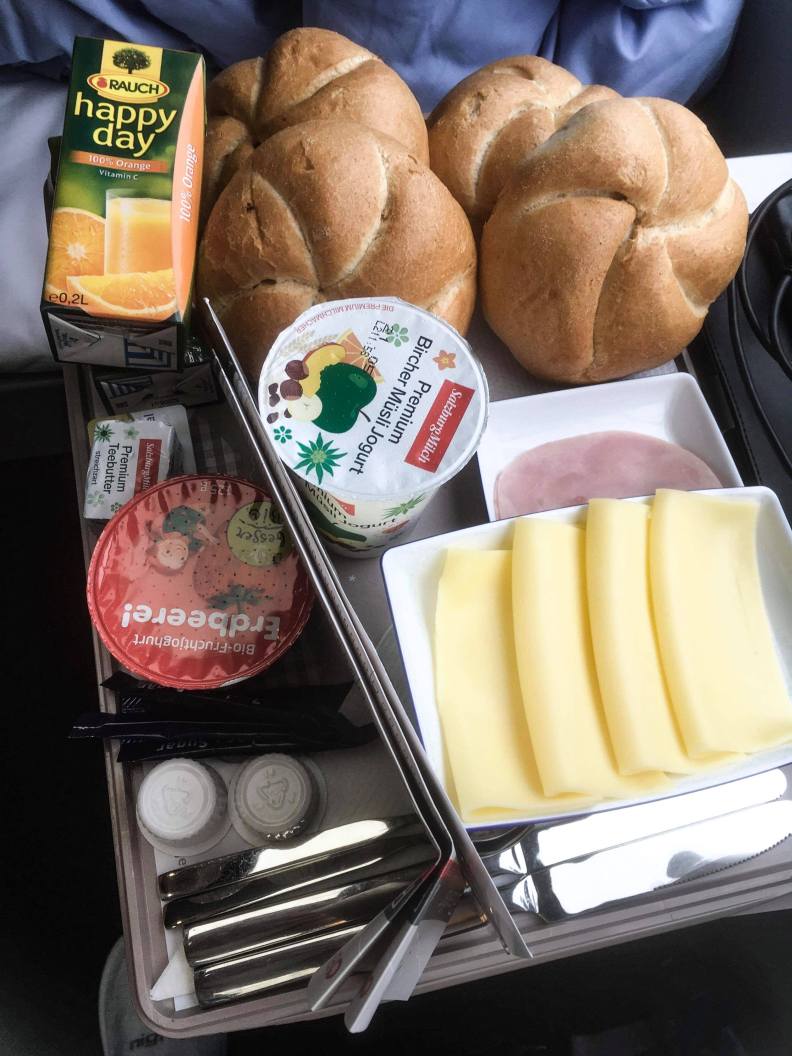 After breakfast we opened the door to give ourselves some air and extra space. The party across from us had just left and we snuck in their room to use their extra outlet to charge our devices. While snooping in their room we realized that the bunk beds were able to fold up so that you could sit on the bottom bunk…. We could have had more space and been able to sit up normally the whole morning. If only we figured that out the night before!

Published by Michael and Rain

View all posts by Michael and Rain